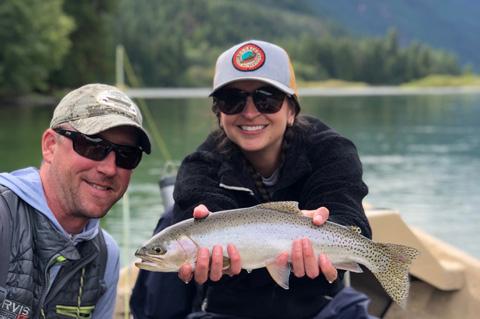 Flows from Libby Dam:  Current discharge from Libby Dam is 4000cfs.  Flows are expected to remain low until runoff.  During the winter months it's possible to experience fluctuations in flows.  Call Libby Dam 406-293-3421 for daily discharge schedule.

Flows remain low here on the Kootenai River, the days are getting longer and generally warmer as well.  While it's never written in stone, discharge from Libby Dam should remain around 4000cfs through April and until runoff starts.  It's only the first of March but spring conditions are here.

Water temperatures are still chilly.  But in another week or two, provided daytime temps stay in the 40s, hatches of early caddis, March brown and blue winged-olives will begin.  That means in spite of cold water temperatures, trout will become more active and start to feed more substantially on nymphs and dry flies.

Dry fly action is still minimal but bugs are starting to perk up during mid-day.  Look for early caddis here and there and blue winged olives for now.  March browns will follow soon.  If you see a rising fish, you're in business.  Water is super clear this time of year.  Don't expect fish to be push overs.  They will likely not be too fussy but you will need to feed them cleanly.  Make a good cast, target trout noses, and get a good drift.

Let's see...the Boston Red Sox have officially started Spring Training.  It's a new year with just a few familiar faces on the field but manager Alex Cora is excited to begin working with new talent and feels the team has enough to compete well.  GO SOX!