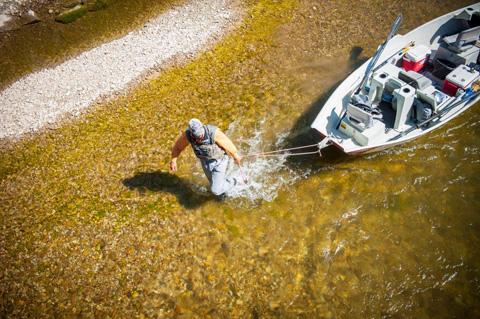 It's not quite spring up here in Kootenai River country but we have good news.  Flows from Libby Dam have been reduced and will be stable at 4000cfs through the end of March for now.  That means there's some great early season fishing available right now.

Expect more clammy cloudy weather through the weekend and into next week.  March continues to come in like a lion and we've yet to see the lamb.  Rain and snow mix will dominate forecast.  Fortunately daytime temps will ooch into the forties which is at least a small sign of spring around here.

At the moment the river is clear and in good shape.  Don't expect much in the way of dry fly fishing and insect activity until we get some substantially warmer daytime temperatures.  The water is still cold but trout will start to feed a bit in the coming weeks.

This is always a good time of year for nymphing.  With low flows you don't need a heavy rig.  You just need to get the flies down in softer runs and pools where trout are most likely to be holding this time of year.  Don't spend a ton of time fishing fast riffles.

Streamer fishing is also productive this time of year especially since bigger fish will be hungry after laying low for a couple months during the dead of winter.  Keep in mind they will not necessarily want to move too fast or too far to get a meal.  Get your streamers down and fish them slowly and erratically.  Nothing like a wounded minnow to get a big rainbow interested in at least a sniff.

In Boston Red Sox news, it's PLAY BALL!  After several weeks of a lockout the players union owners have finally come to an agreement.  Spring training will start immediately and while opening day was and remains delayed until April 7, the season will still be 162 games.  For now the Sox have managed to keep essentially the same playoff roster they had last season.  Infielders Dalbec, Arroyo, Bogaerts, and Devers are key players.  In the outfield Jackie Bradley Jr. has returned to Boston and Kike Hernandez and Verdugo will anchor the deep green.  Ace Chris Sale will hopefully be healthy and other starters from last year will hopefully pick up where they left off in October.  Go Sox!!!