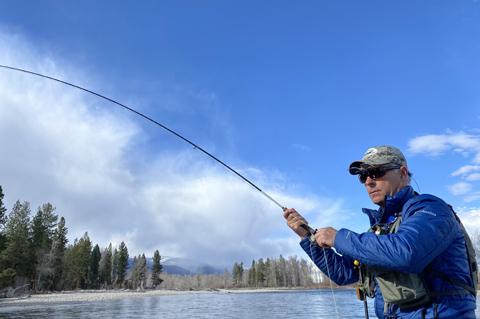 Flows from Libby Dam:  Current discharge from Libby Dam is 4000cfs.  Flows are expected to remain low until runoff.  During the spring months it's possible to experience fluctuations in flows.  Call Libby Dam 406-293-3421 for daily discharge schedule.

Flows remain low here on the Kootenai River, the days are getting longer and generally warmer as well.  While it's never written in stone, discharge from Libby Dam should remain around 4000cfs through April and until runoff starts.  The Kootenai River is still in great shape and fishing conditions are excellent.

Nights have been freezing and snow is still locked up in the Cabinet Mountains.  That means for at least another week, the Kootenai River will remain in excellent shape.  It will take multiple nights of above freezing temperatures for runoff to really start and it doesn't look like that will happen anytime too soon.

For weather, expect mostly sunny skies through mid week with daytime temperatures in the 50s.  Toward the weekend, we could see a change with mostly cloudy skies, chance of light precipitation, and cooler temperatures.  Water temperatures are still chilly but provided warmer weather continues, hatches of early caddis, March brown and blue winged-olives will begin.  That means in spite of cold water temperatures, trout will become more active and start to feed more substantially on nymphs and dry flies.

Dry fly action is getting better with most surface action during late afternoon and lasting a couple hours.  Look for early caddis here and there and blue winged olives for now.  If you see a rising fish, you're in business.  Water is super clear this time of year.  Don't expect fish to be push overs.  They will likely not be too fussy but you will need to feed them cleanly.  Make a good cast, target trout noses, and get a good drift.

All access points and boat ramps are clear.  Don't forget from Libby Dam downstream to the mouth of the Fisher River is closed this time of year for spawning. Wading conditions are great under low flows especially below between the Kootenai Falls and Bighorn Terrace boat ramp. Nymphing in this stretch and through China Rapids section has been very productive lately.

In other news, the Boston Red Sox are off to a great start!  The pitching staff has started to come together and the names of Rodriquez, Eovaldi, Perez, and Barnes are starting to become known across MLB.  Bats have been making contact and putting runners on base as offensive led by Kike Hernandez, Bogarts, Gonzalez, Martinez, Dalbec, Verdugo, and Devers has really stepped up run production.  With a 10-6 record at this point the Sox are looking stronger was we head into late April.  Go Sox!