The remote Yaak Valley is a place made up of woods and mountains and free-flowing streams, creating bird cover not dissimilar to that found in northern New England. Here at Linehan Outfitting we are grouse hunters through and through, and our populations of native grouse have thrived here for eons. We have been running dogs and offering some of the finest grouse hunting in the lower forty-eight states since 1992. This corner of Montana has three species of forest grouse, namely Ruffed, Blue (Dusky), and Spruce grouse. All three exist in good number here, making the Yaak one of the only places where you can hunt three species of forest grouse in one day.

In the heart and mind of an upland bird hunter, nothing can compare to the sight of a dog on point. We are passionate about our pursuit of upland birds behind working gun dogs, and if you share our love of dogs, this is the hunt for you. The Linehan Outfitting dog string is made up of beloved setters and retrievers who are ready and eager to hunt all day. We also welcome you to bring your own dogs along. Either way, if you come to the Yaak in autumn, you’re in for a fine Montana bird hunt.

Learn more about our pricing options: 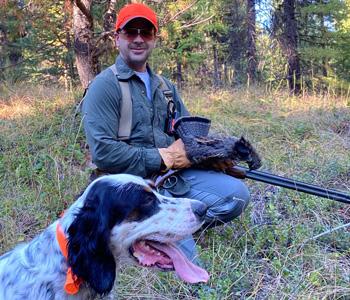 Though Ruffed Grouse populations are cyclical by nature, ruffs generally occur in great numbers in our covers. These birds inhabit logged areas with ten to thirty-year-old regrowth, coniferous forest edges, alder runs, aspen groves, and creek bottoms. They feed on insects, clover, berries and other mast, which contribute to their sweet, pink flesh. In the feather they are a complex mottled brown or gray with a barred tail, and they are especially strong flyers. It has been said many times that Ruffed Grouse are the King of the gamebirds, and we agree. To that end, we devote the majority of our time to the pursuit of these fine birds. There’s nothing more satisfying than watching a dog flush or point a Ruffed Grouse, though a clean shot and puff of feathers as the bird heads toward the darkest cover is a fine chaser.

Blue Grouse, also called Dusky Grouse in our Northern Rocky Mountain region, are the largest of the three forest grouse species we hunt. In the hand they are a truly impressive bird. Blues are found in good number throughout the higher elevations in our region. They frequent subalpine terrain characterized by open ridgetops and bands of conifers, and they feed on a variety of insects, berries, and plants. They have a slate gray plumage, and they camouflage well against their rocky environment. On the plate they have a slightly darker meat than the Ruffed Grouse, but it is no less prized. Blue Grouse are typically found above 4500 feet in elevation, so hunting Blues is about putting in the miles and climbing to open ridges. Be prepared to hike during a Blue Grouse hunt and expect to sleep well that night.

Spruce Grouse are found in healthy numbers and frequent deeper woods and thick coniferous cover. They feed on insects, clover, berries and their namesake evergreen needles. The males especially have a darker plumage than Blue or Ruffed Grouse, and they sometimes appear blue-black. This corner of Montana is one of the few places you can find Spruce Grouse in huntable populations. Spruce Grouse, especially the males with their signature scarlet eye combs are a gorgeous bird and make an interesting addition to the trophy room. Spruce Grouse meat is the darkest of the three species we pursue, and a bit stronger in flavor. We love it and see Spruce Grouse as a particularly special addition to any meal.

Access to our bird covers is via logging roads and the terrain is generally moderate. To be sure, the ground is uneven, and as is the case in all forest grouse hunting the cover can be thick. Walks for Blues require a bit more climbing, depending on the location we choose. It’s not uncommon on a good year to hunt hard all day and flush twenty or more birds; relatively steady contacts are the norm.

As is the case in upland hunting, a solid, well-trained dog adds a wonderful dimension to the hunt. We have come to prefer the combination of flushing dogs and pointers, and currently run Golden Retrievers and English Setters. Our dogs know these birds and this terrain well, and they are conditioned to hunt well before the season opener. That said, we are more than happy to accommodate guest dogs, and hunt them exclusively or in alternate with our own. 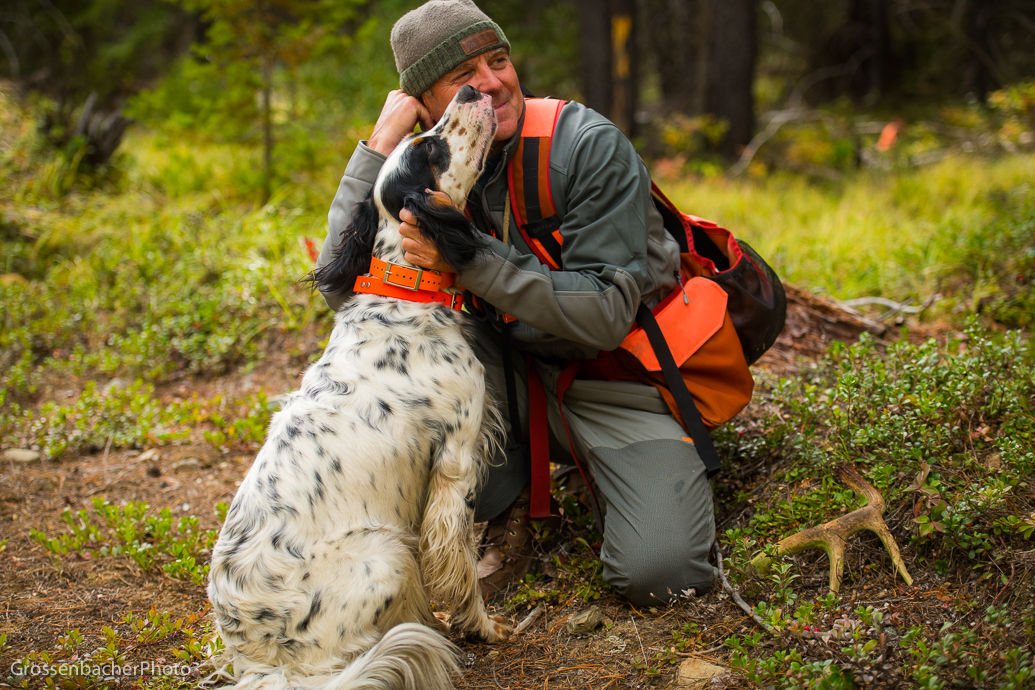 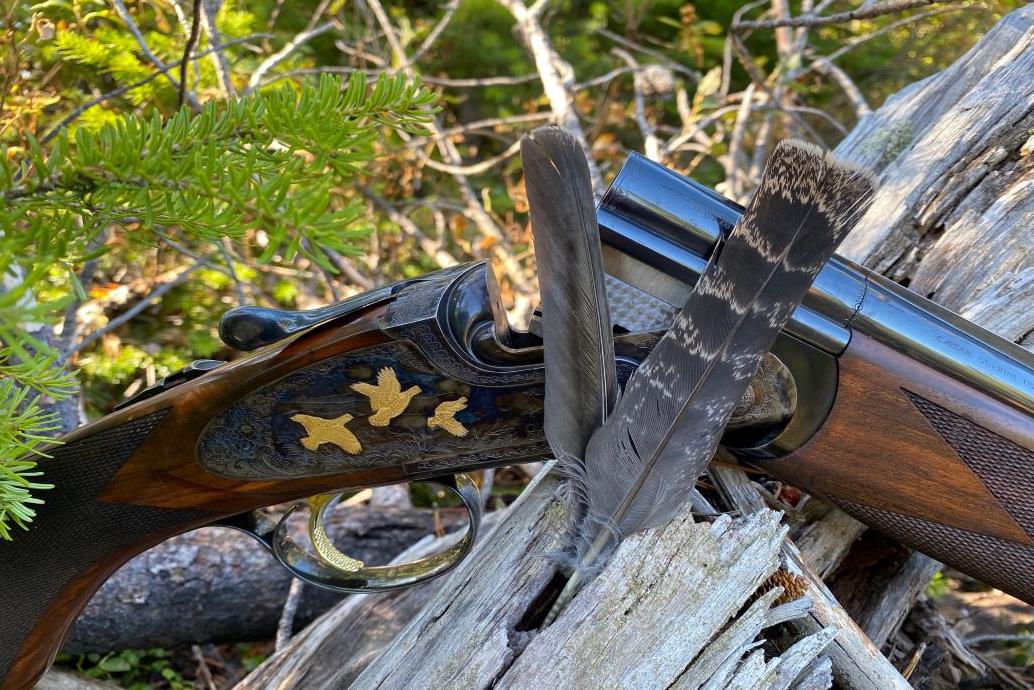 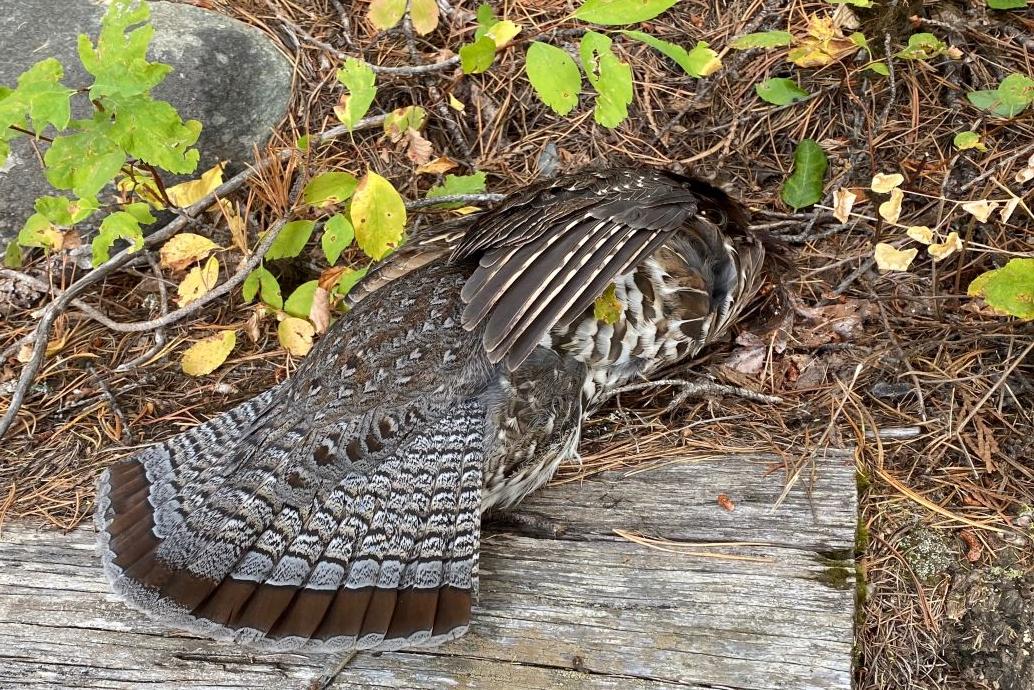 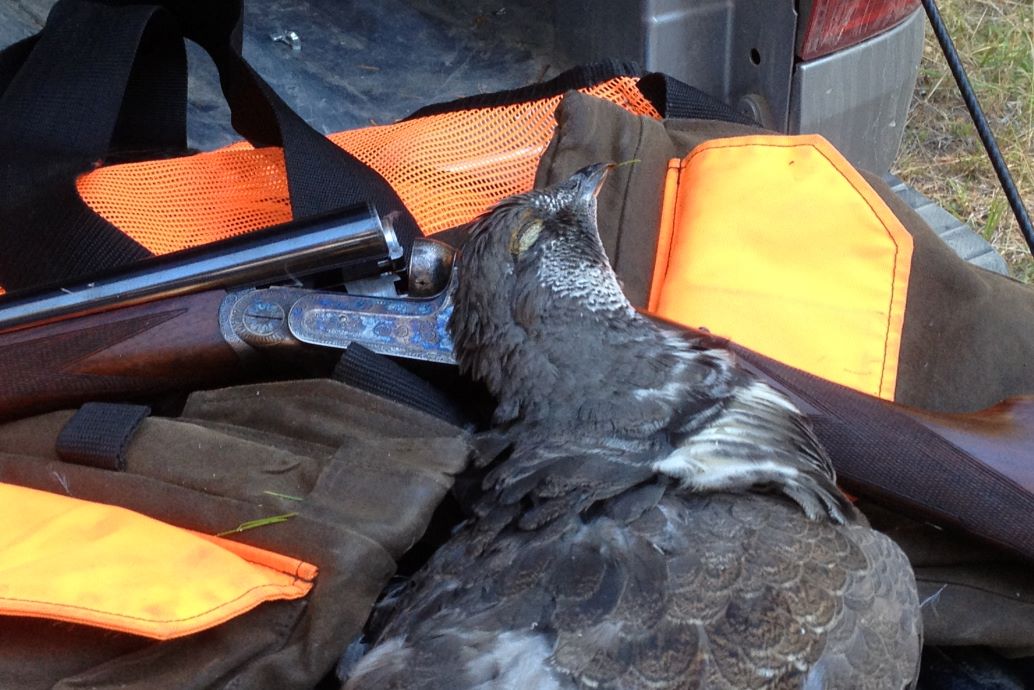 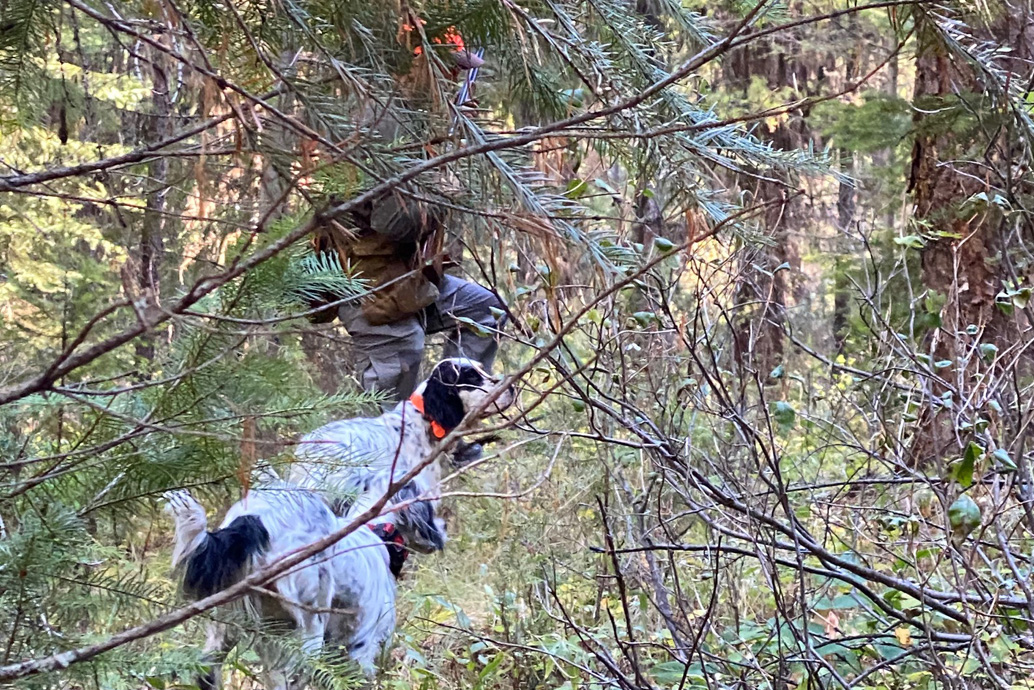 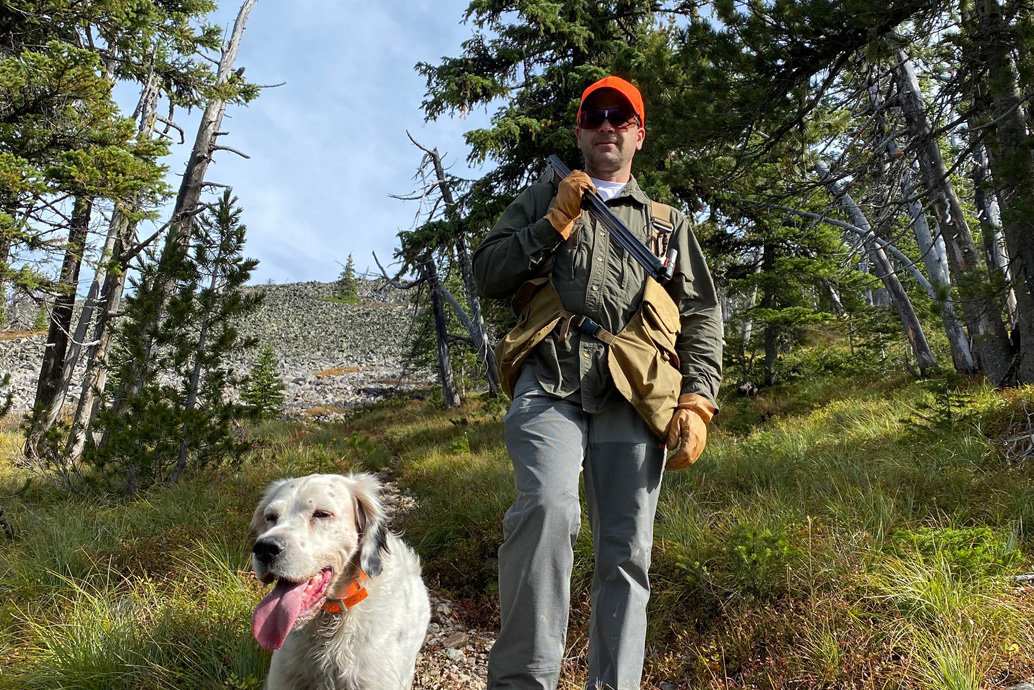 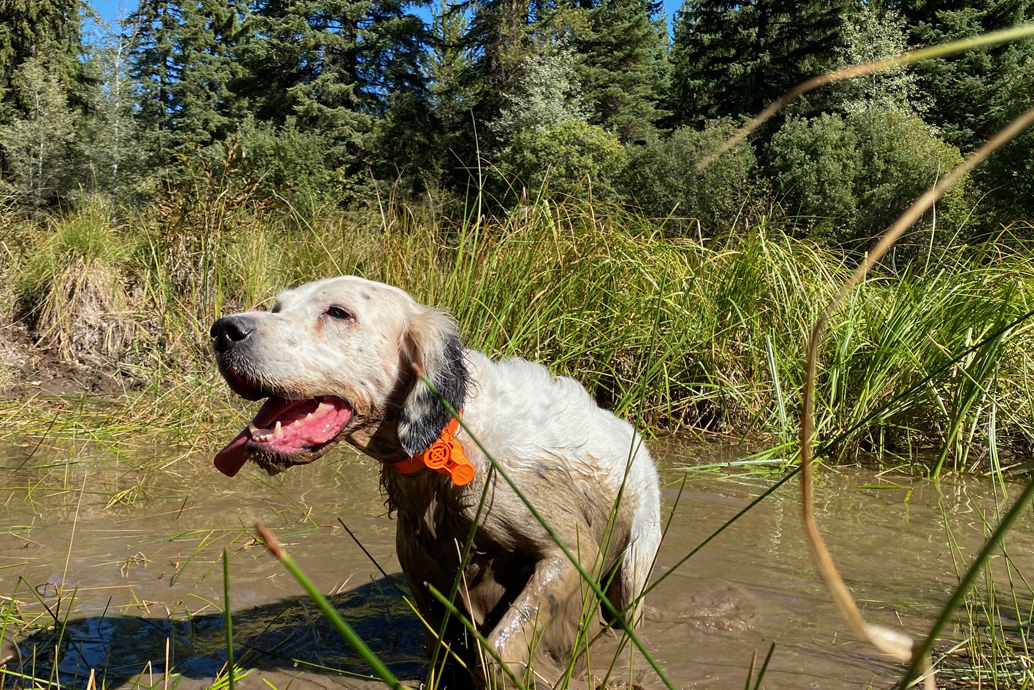 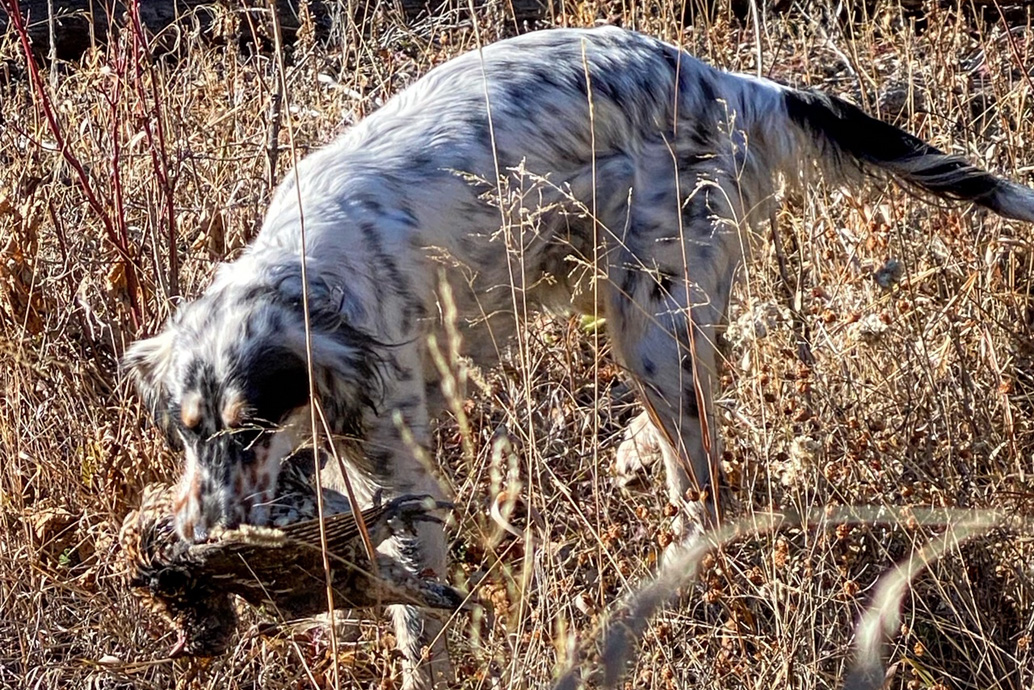 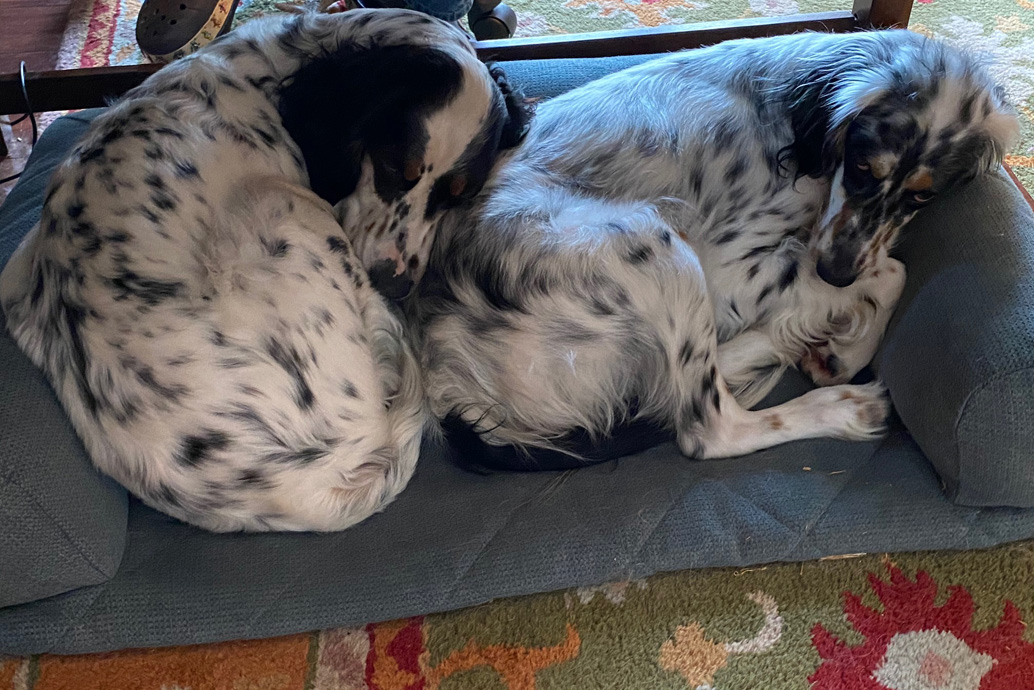 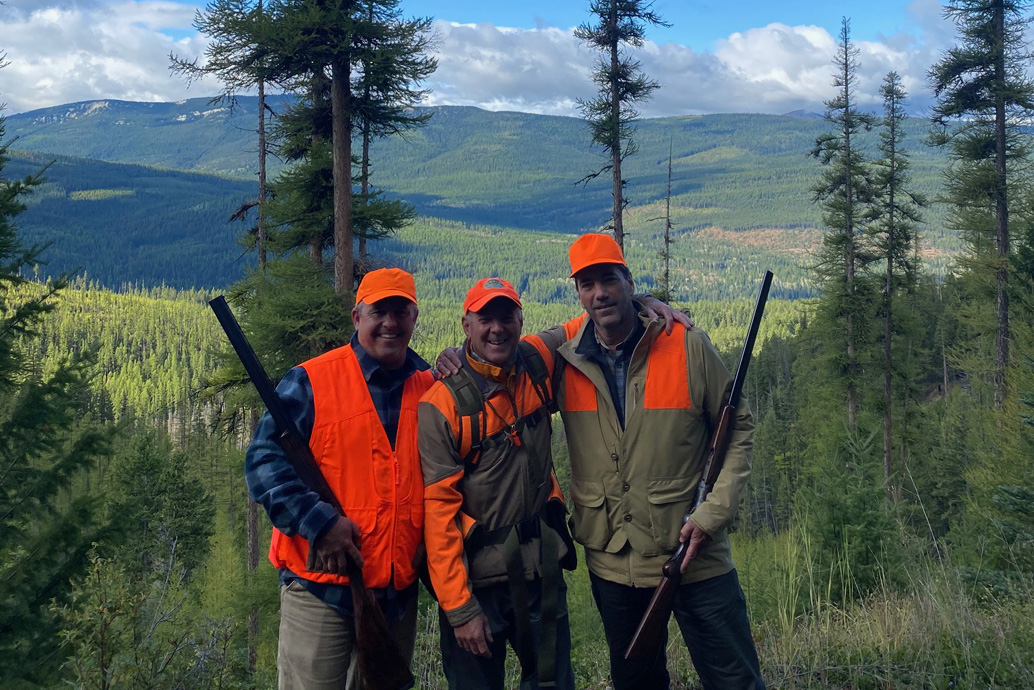 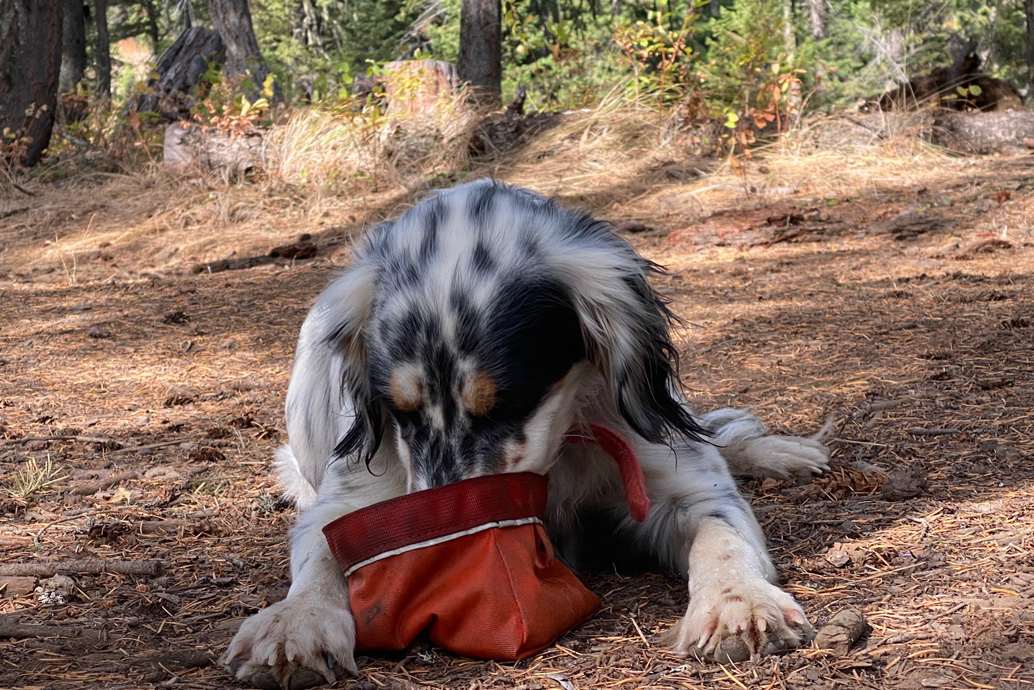 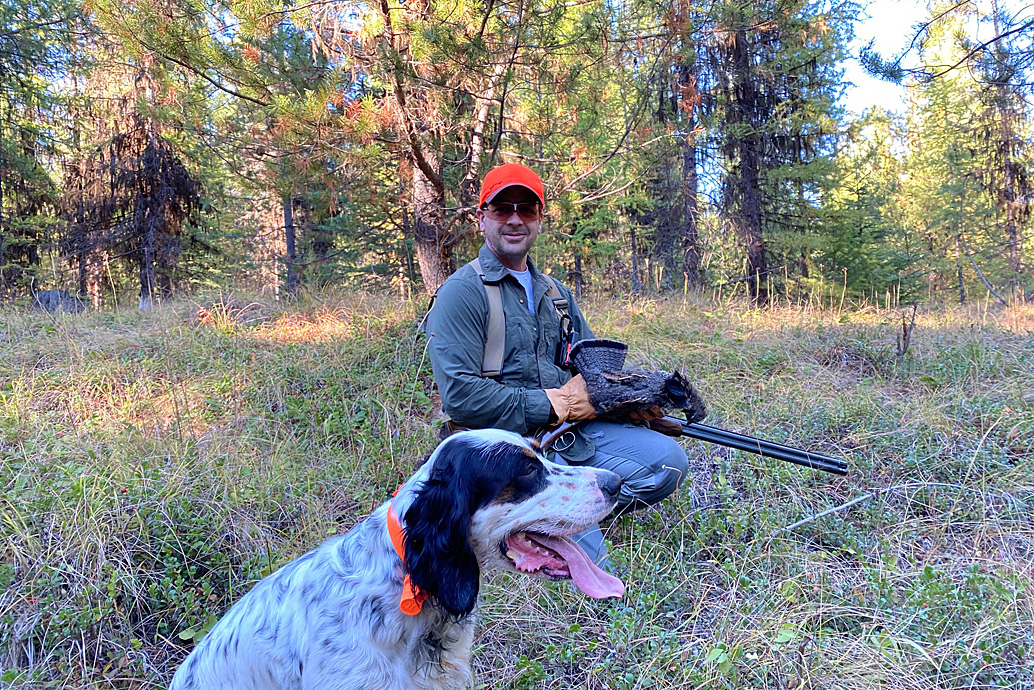 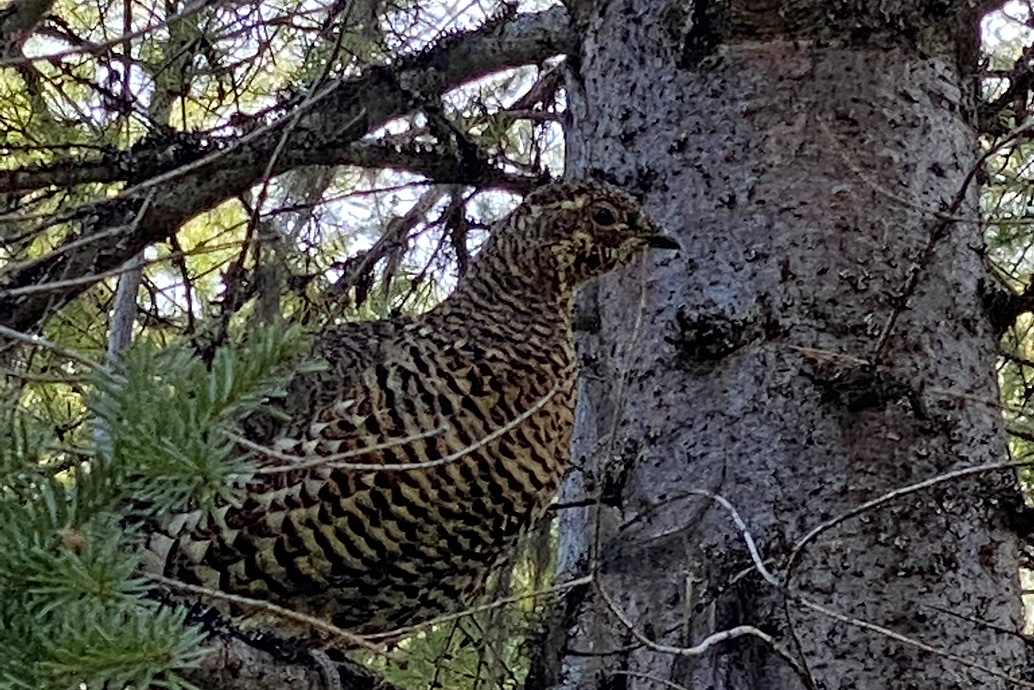 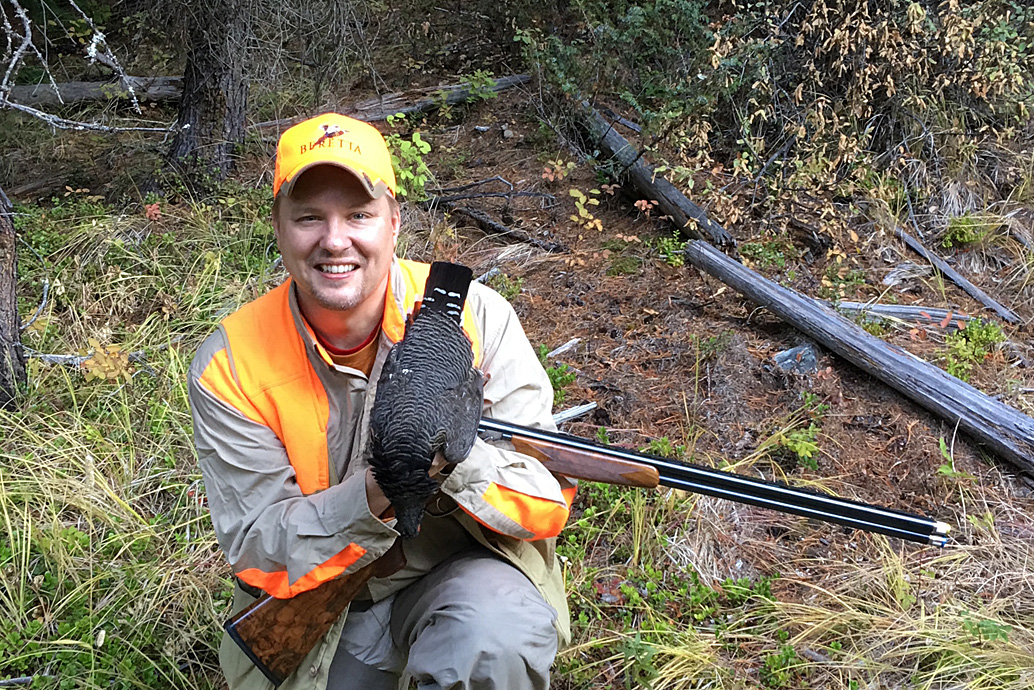 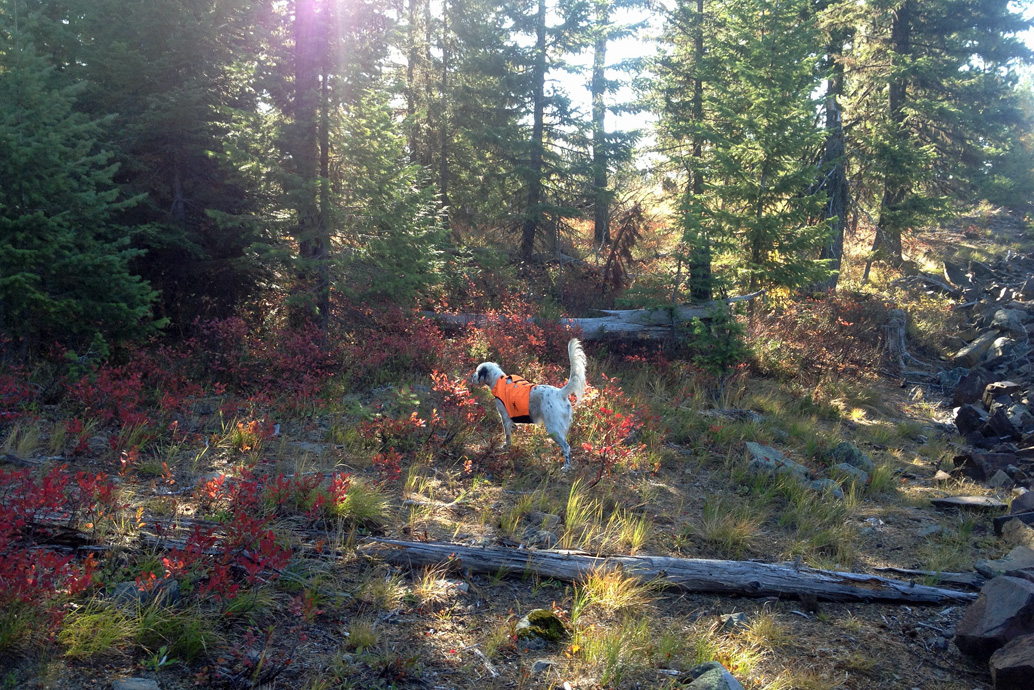 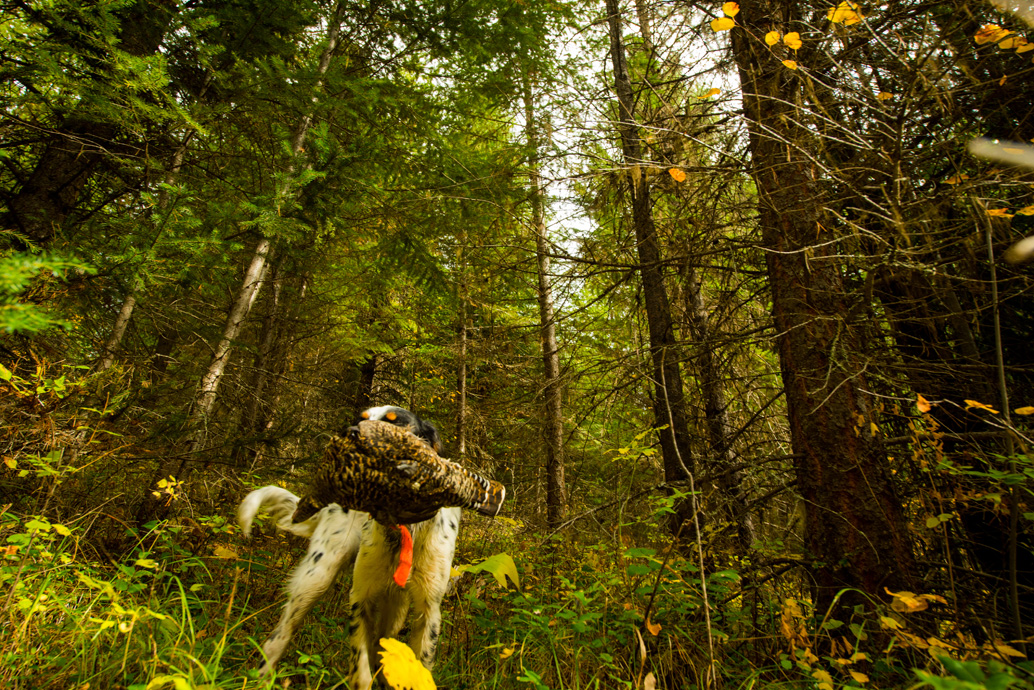 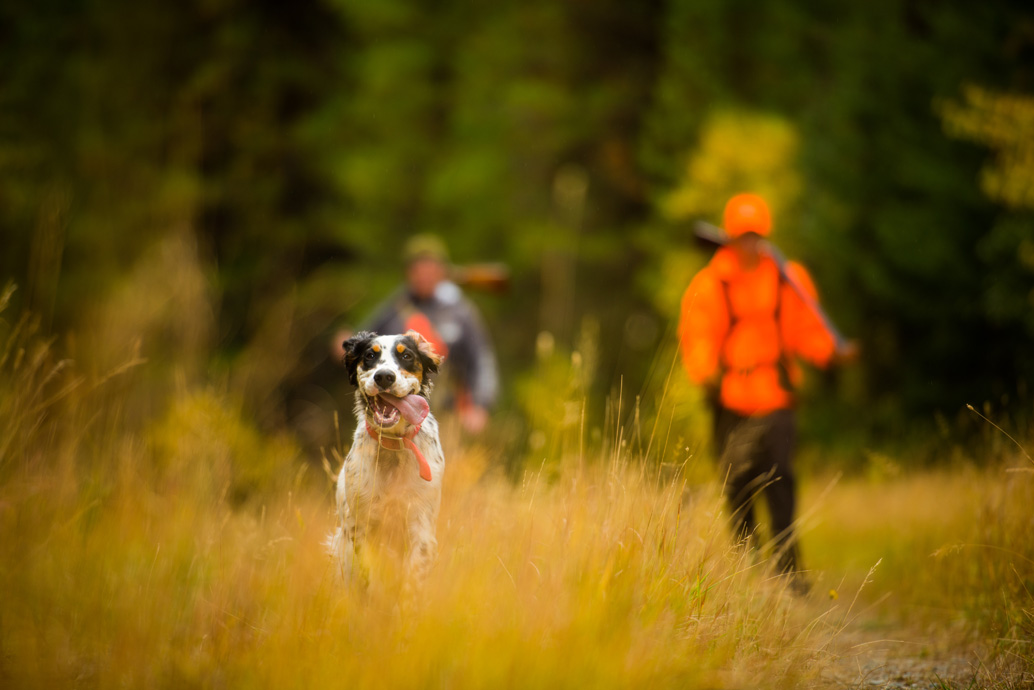 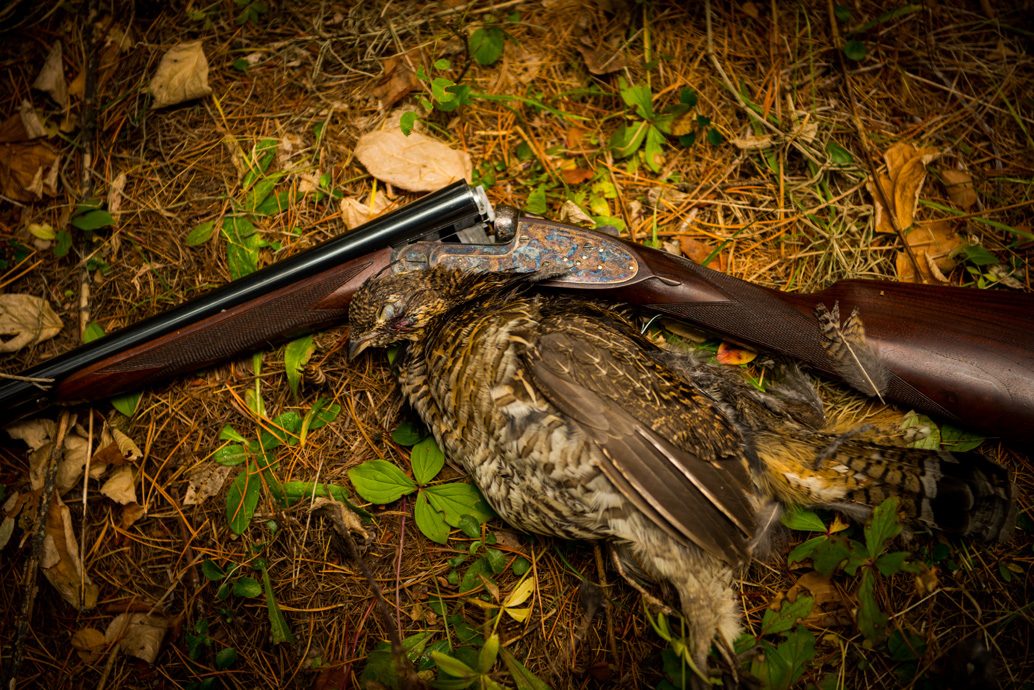 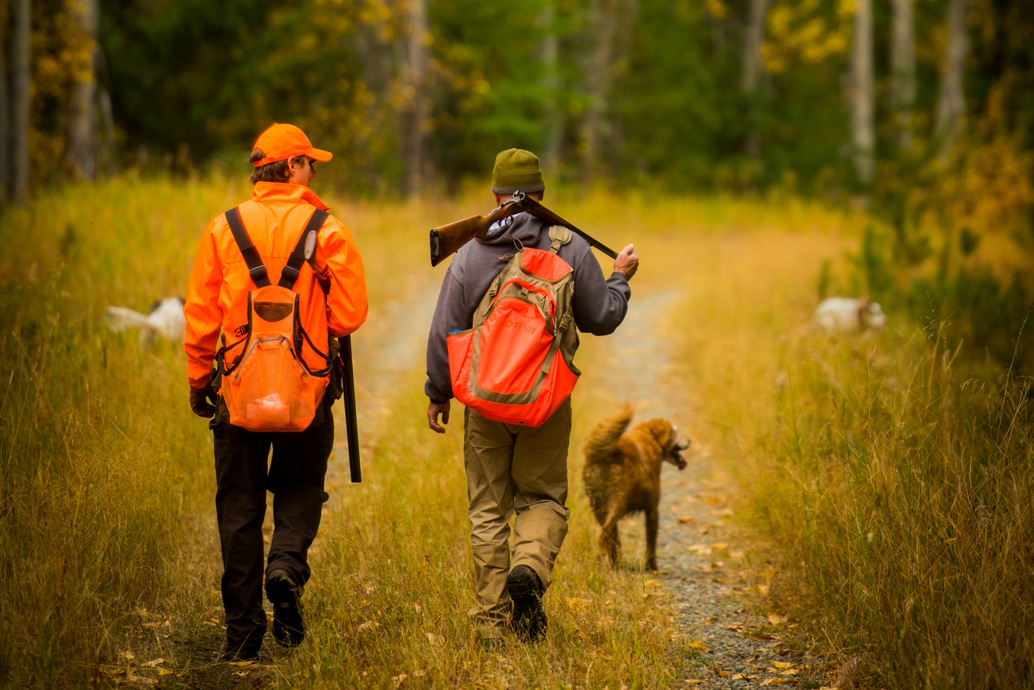