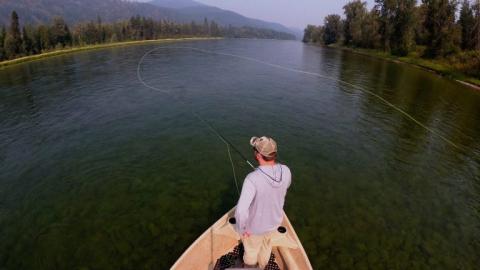 The other day I was fishing with a guest and immediately noticed the gentleman was not properly loading his rod on his back cast. Sure, there was a light breeze. But that really wasn’t the problem.

“Wait a bit longer before you start your forward stroke,” I told him immediately.

He made a couple more casts that were marginally better but it was clear to me that his timing was good.
“Make another cast for me.” I told him.

This time I wanted to see exactly where he started his back cast. Sure enough, he was starting his back cast with the rod halfway through the stroke and not giving it enough of a chance to load properly.

We all make the same mistake. When fishing from a drift boat it’s common to stand with the rod parallel to the water. I’m guessing it’s simply that we’re elevated above the water and we mistakenly assume the rod is ready for a back cast.

“Harold, this time I want you to tap the water with the tip of the rod and start your back cast with the rod pointed down.”

Harold looked at me for a moment and started to say something.

“Trust your guide.” I told him with a smile.

He looked down at the water, tapped it with the tip of his rod, started his next cast with the rod tip pointed down and snapped out the finest cast he’d made since we shoved off the ramp.

Keep in mind when fishing from a drift boat it’s critical to start your back cast with the rod tip pointed down at the water. That way, you’ll allow the rod to fully load and give it a chance to do the work it was designed to do in the first place. And better back casts will help you catch more fish.