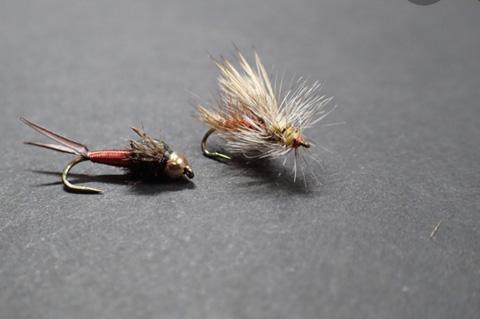 During August and September hoppers and droppers are the rig du jour.  While it's true that more often than not dry/dropper rigs are generally a dry fly with a nymph dropper, there are times when dry/dry rigs are very effective too. Typically choosing a hopper pattern is usually straight forward.  Choosing the right dropper can often require a bit more thought and can make the difference between a fair day and a really good day.

If you see rising fish you immediately know they are generally active on or near the surface.  In this case, choosing a dry fly as your dropper might be a good idea.

Yesterday I was floating the Kootenai River with a guest and the hopper action was just okay.  We were moving a few fish but I just had a feeling we could be doing better.  I looked across the river to the far bank that was still in the shade and noticed a few fish rising.  I ferried the boat across the river, lined up my guest, and he floated a hopper over a rising fish.  Nothing.  He made another cast.  Nothing.  Only then did I notice a caddis bounce out of the water ahead of the boat.  I quickly hung a size 16 Mathews X-caddis off the hopper, my guest made another cast and bang, the rod was bent and we landed a thick 14" rainbow.  Sure enough it had eaten the x-caddis.

2.  What type of rises are you seeing?

Rise forms can tell us many things about what trout may be eating.  If you don't see a fish's head above the water but instead see a boil, most likely that fish is eating something in the film or just under the surface of the water.  In this case, it's best to fish an emerger pattern or a lightly weighted nymph.  You don't want to fish your dropper too deep in this case since fish are clearly near the surface.  A heavy nymph will drop below suspended trout preventing them from even seeing your fly.

This common mistake became very clear to me a number of years ago.  For as far as I could see down the bank I was floating, fish were boiling.  They weren't necessarily breaking the surface of the water so I suspected they were eating emergers.  I tied a tungsten bead head nymph onto the hopper with about 24 inches of tippet.  My guest made several good drifts and we came up short.  Not a single hit and fish were still active.  I switched the nymph and inadvertently tied on a less heavy bead head.  My guest made a good cast to a rise form and sure enough the hopper twitched, he set the hook, and he was fast to a handsome native Kootenai River westslope cutthroat trout.

Additionally, one of my favorite go to droppers in this case is a size 16 hard bodied ant.  A small hard bodied ant will only sink a couple inches at the most and can be very effective during times when fish may not be ready to commit to a big hopper on the surface.

The most common way to fish a hopper/dropper is with a weighted nymph.  Hoppers will move fish during mid to late summer.  But there are times when trout may not be feeding aggressively or conditions are such that they are shy to be near the surface.  In this case it's best to fish a fairly heavy nymph on at least 24 inches of tippet.  You want to get the nymph down in order to increase your success while waiting for trout to start keying on your hopper.

Here on the Kootenai River the water becomes gin clear by mid-summer.  Combine that with lots of sunshine and there are days when trout want to eat aggressively but are very wary of crushing a hopper even though they're actively feeding.  Last week I had day like that.  Everything smelled good.  The weather was stable, the trout had been eating hoppers well but by lunch time we'd only had a few hits on the hoppers.  I convinced the angler in the front of the boat to drop a tungsten pheasant tail perdigon off his hopper and on his second drift he hooked a dandy rainbow.  I always tell people that first time is lucky.  Second time is coincidence.  Third time you're onto something.  By the third fish in almost as many casts, the angler in the back of the boat couldn't tie a dropper onto his hopper fast enough.  That afternoon, we never looked back.  Sure, we got a few on hoppers but it was all about fishing a little deeper that day.

Hopper/dropper rigs are standards during mid-summer.  By being a bit more thoughtful about your choice of droppers you will increase your chances of success.

Contact us anytime if you need more details on fishing hoppers and droppers or any other help with your fly fishing needs. And be sure to check out our on-line store for all Linehan Outfitting branded wear and goods and all Orvis gear.