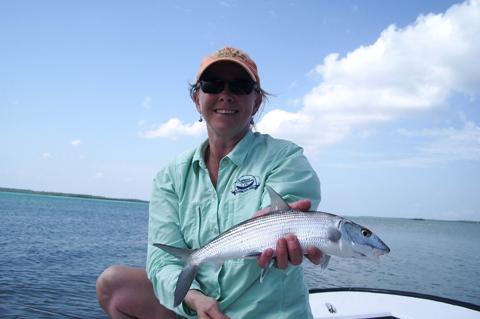 Choosing a fly rod for your first saltwater adventure can be kind of daunting.  Ideally, owning a couple different size rods would be best.  But let's face it.  New rods can be a fair sized investment so for the sake of this blog let's just assume you'll be buying one rod for your first trip.

Typically saltwater angling revolves around three primary species.  Bonefish, permit, and tarpon.  Obviously the idea is to choose the best tool for the job.  Bonefish generally average between two to five pounds, permit from five to fifteen and baby tarpon from five to twenty.  Of course each of these species can get significantly bigger especially permit and tarpon but here we're going to stick with a general average while trying to determine which rod weight will cover most bases.

The other very important consideration for a saltwater rod is the action.  There is always a breeze and sometimes outright windy conditions while fishing the salt.  For that reason it's good to have a faster action rod.  Leave the soft actions for trout fishing and dry flies.

So, at this point we know we'd like a rod that can punch a cast through a breeze and that will fight and handle fish in the five to twenty pound range. Seven, eight, and nine weight rods fit this bill nicely.

Where to go from here?  Which weight will give you the most options?

For my money I always find myself going with a nine weight rod.  And the Orvis H3 D is the perfect tool for the job.

Recently I was fishing the salt and headed out to wade a flat with a seven weight.  For the first hour it was calm and flat and I did mange to land a couple bonefish and the seven weight handled them perfectly well.  Then the wind picked up and I quickly found I was under gunned and couldn't make the necessary casts or turn the leader over even if I did manage to get the distance.  Later in the week under the same circumstances I left the lodge with an eight weight.  Again, all was well for the first hour and then again, the wind picked up.  While you might think that moving up one rod weight would make a big difference in casting into the wind, it really didn't.  The rest of the week we had a steady ten to fifteen mile hour wind and when I finally loaded my nine weight I was able to fish all day and make the casts I needed.

All things considered, a nine weight may well be the perfect all around saltwater rod weight because it will handle a stiffer breeze and will also handle fish on the smaller size and allow you to appropriately fight fish on the larger average size as well.  On another trip to Belize we had a nice mixed bag of bonefish and permit throughout the day. The nine weight allowed me to quickly play and land bonefish in the three pound range and later in the day a nice permit coming in at about ten pounds.  I'll never forget that fish.

We had decided to spend the afternoon hunting permit around mangrove cayes in the lagoon.  With about an hour of fishing left we were poling along a small caye with a flat on the leeward side.  As we neared the end of the flat where it begins to drop off into deeper water two black tails appeared about fifty yards away.  Dubs, our guide, did a masterful job of closing the distance to about thirty yards without spooking the fish.  They were feeding toward us so he staked the boat and we waited.  About ten minutes later they were both withing casting distance and I let one fly.  My crab pattern plunked into the water about ten feet in front of the two permit and we watched one of them accelerate, tip up, and eat.  After about a twenty minute fight we had the fish in hand and it was all thanks to having a nine weight rod.  I honestly don't think I could have gotten it done with a seven or eight weight rod.

If you're in the market for a saltwater rod and you're looking to travel with just one for the average sized bonefish, permit and baby tarpon, a nine weight is the right tool for the job.

Check out our online store for all Orvis Rods, reels and gear and give a shout if you need help. 406-295-4872 https://linehan-outfitting.myshopify.com/collections/orvis-gear