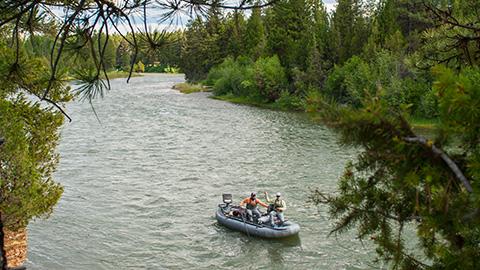 I remember the day the light bulb went off.  I was standing shin deep in a small New Hampshire stream under the colorful fall foliage canopy while several brook trout rose in front of me.  I was a rookie angler to say the least but had finally managed to learn how to cast without embarrassing myself in the event someone happen to look my way.  None of it was pretty but it was beginning to work.  I knew little about the importance of drag free drifts and the extent to which they contributed to the success of catching trout.  I was vaguely aware of the term mending, but it hadn’t really taken hold as my Nana Linehan used to say.

For over an hour I’d make a cast, drop the fly right in front of a fish, and immediately the current would grab my elk hair caddis and swish it downstream so fast it was impossible for anything to grab it.  Then I remembered reading something about mending the line a couple nights before.  And I gave it a shot. I made another cast and immediately flicked the tip of my rod upstream in order to move the belly of the line upstream as well.  I watched with great surprise as my fly stayed on the surface, stayed in the feeding lane of the rising fish, and was promptly eaten in a quick splash by one of the brookies.  I hit the little guy so hard he actually flew over my head and landed on the yellow line in the road behind me.  But I had executed my first true mend and it had worked.  By the end of that day, mending had taken hold in my mind.

Mending the line is necessary for two simple reasons.  It accomplishes a drag free drift which makes the fly look more natural by allowing it to float downstream at the same speed as the current.  And it allows you to increase the length of your drift if necessary or desired.

Mending is easy but it’s important to keep in mind that’s it’s also a process, and more often than not, it’s necessary and advantageous to make several mends in order to achieve the perfect drag free drift.  Let’s keep it simple for now and assume there are two general types of mends.  The single mend and the several mend.

The single mend is easy.  Let’s say you’re standing in a run where the current is steady, even, and the same speed with fish rising in front of you much like the little brook trout I had rising in front of me many years ago.  Start by measuring out the proper distance to your target fish by false casting a couple times.  Then make your cast and land the fly about four feet upstream of the rising fish.  Immediately after the fly hits the water, bring your rod parallel to the stream and gently roll the belly of the line, the line between you and the leader, upstream as well.  It doesn’t take much.  Simply lift the belly of the line slightly off the water, move your rod across your body, and lay it all down again.  Good.  Nice mend.  With the belly of the line now across from your fly, you have prevented the current from sweeping the belly of the line downstream and pulling the fly faster than the current or dragging the fly throughout the entire drift.  Now your fly looks natural, it’s floating the same speed as the current and next thing you know you’re tight to a nice, thick rainbow with gillplates the color of ripe apples.

Now let’s make a several mend.  And here’s where the process of mending becomes important.  Let’s say you have the same rising fish in front of you but instead of an even current, you have slack water immediately in front of you and faster current beyond where the fish are rising.  This situation will require several mends in order to achieve a drag free drift.  Once again start by measuring out line with a couple false casts.  Be mindful to keep your backcast high and when you’re ready, land the fly upstream of your target fish.  Good cast.  Since the fly landed in the faster current beyond, you’ll need to make a big sweeping mend to set up the several mend process.  Good job.  You have the entire belly of the line, including the leader, upstream of the fly.  Now we have to consider the effects of the slack water on our drift.  If we left the mend as is, the faster current beyond would sweep the fly and leader quickly downstream leaving most of the line stuck in the dead water immediately in front of you.  In order to make the drift work, quickly make two or three small downstream mends just off the tip of your rod.  Nice.  Looks good so far and now you have the belly of the line basically across from the fly, and you’ve compensated for the two different current speeds by first making a mend upstream, followed by a series of smaller mends downstream.  Wait…wait…and there he is, fourteen inches and the biggest fish of the day.

It’s important to keep in mind that depending on the situation, mending is a process and not a single action.  Mending the line is about preventing the fly from being dragged downstream by the current and achieving a drag free drift.  Sometimes all it takes is a single upstream mend.  Other times a mend upstream followed by several mends downstream is necessary.  Or, if you’re fishing from a drift boat, upstream mend after upstream mend, after upstream mend works since the boat and your line are traveling at the same speed.  Regardless of the situation, by keeping in mind that mending is a process and not a city in China, you will greatly improve your ability to achieve more consistent drag free drifts and catch more fish as a result.