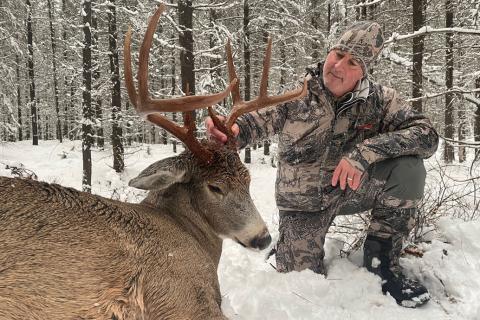 I was talking with Sean and Seth, two of our hunting guides the other day during a particularly difficult hunt due to conditions.  We covered all angles, discussed what we could and could not control, and especially about success, or more specifically how to define success.  In the end we all agreed that hunting, perhaps more than fishing, is about so much more than harvesting an animal.  Sure, we all want success.  And trust me, nobody wants it more than your guide.

Here at Linehan Outfitting we believe hunting is inherently more about the process.  At least with fishing you know the trout are in the water because you can often see them during the day.  Are they eating?  That’s always another story.  But with hunting, you can go days without actually seeing game.  That’s the nature of Mother Nature.  To this end, hunting must always be  more about learning the habitat, more about learning the nuances of the weather, the quarry, and learning more about being in the moment.  Things can happen fast.  We often remind hunters that you can go from zero to hero in a matter of seconds.

The photo I've posted with this blog highlights my point.  Sean, our head guide, and guest Gray T. hunted hard every day from dark to dark.  They covered the miles, checked the cameras, sat in stands, and late in the afternoon of the last day of the hunt they had only seen one small buck.  And this was during the heat of the rut!  Were they discouraged?  A little, to be sure.  Had they given up?  Absolutely not.  Sean came up with one last hunt in an area they had been consistently seeing does.  Keep in mind there are now only three hours left in the season.  As they slipped through the dark timber still hunting by taking a step or two, waiting for a few minutes, taking a few steps, waiting a few minutes, they caught movement about fifty yards away.  Literally moments later this big buck was on the ground.  And it all happened within five seconds.

When hunting, if you're not in the moment, the moment is not in you.